Since 2004, the Education Law had allowed up to 40 % of the curriculum to be taught in minority languages in public high schools (grades 10 to 12). It did not impose language restrictions on private schools.[1] Cabinet regulations No. 468 of 12.08.2014 (annex 25) has provided for an analogous language proportions in grades 7 to 9, with some flexibility.

In March 2018, the Education Law was amended to further restrict the shares of instruction allowed in minorities’ mother tongues, and to apply them to private schools as well. Besides, the use of minority languages is made dependent on whether they are official in the EU. 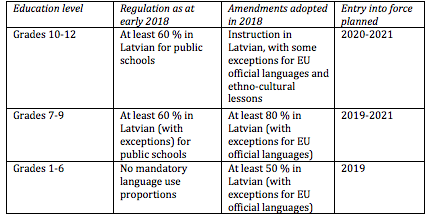 The authorities are gradually abolishing the minority education: .

-1992 – amendments to the Law on Languages. Public post-secondary education is ordered to be mainly in Latvian, starting from the second year of studies.

-1998 – a new Education Law is adopted. It provides for education only in Latvian:

-in public universities (with some exceptions), starting from 1999, and

-2004 – after the widest non-violent protests since regaining independence[5], the authorities soften the Education Law provisions. Minority high schools are allowed to teach up to 40 % of curriculum in minority languages.

[..] the principle of equality permits different attitude to persons,  who  are  in  different  circumstances  ([..]). The  Constitutional  Court  agrees  with  the  viewpoint  of  the  submitter  of the  claim,  who –inter  alia  indicating  to  the  ECHR  Judgment  in  case Thlimmenos  v.  Greece  ([..])-points  out  that  a person, belonging to ethnic  minority  is not in equal circumstances  with  persons,  belonging  to  the  basic  nation.  Among  the  criteria,  which determine this difference, one may name language and ethnic belonging[6]

-2014 – a preamble to the Constitution was adopted, stressing the role of the Latvian language.[7]

-2019 – the current cabinet of Latvia is approved. Its declaration maintains the course to squeezing out minority language from schools: “160. We will ensure sequential transition to education in the official language”.[8]

With the Framework Convention for the Protection of National Minorities (FCNM), Latvia has committed itself to:

-ensuring “adequate opportunities for being taught the minority language or for receiving instruction in this language” in certain areas, with caveats of “sufficient demand” and “as far as possible and within the framework of their education systems” (Article 14).

The International Convention on the Elimination of All Forms of Racial Discrimination (CERD) bans discrimination based on “descent, or national or ethnic origin”. This gets interpreted as including discrimination by language as well,[9]  including in particular the field of education. [10]

In Latvia, international law is regarded as superior to Latvian statutory law, although not to the Constitution.

April 23, 2019 - the Constitutional Court upholds the new restrictions on the use of minority languages in public schools, in a judgment in case No. 2018-12-01.[11] The court ignores its own reasoning used in the aforementioned 2005 case. Moreover, it describes the existence of minority schools as segregation[12. Instead of responding to the criticism expressed by the Committee on the Elimination of Racial Discrimination and Advisory Committee of the Framework Convention for the Protections of National Minorities (see below), the court claims that these expert bodies did not have full information.[13]

A separate case on the same restrictions as concerns private schools, No. 2018-22-01, is still pending before the Constitutional Court, as at September 2019.

OPINIONS OF THE RESPECTIVE MONITORING BODIES

23.08.2018. UN, Committee on the Elimination of Racial Discrimination:

23.02.2018. Соuncil of Europe, Advisory Committee of the Framework Convention for the Protections of National Minorities:

“Plans to narrow the scope of national minority language teaching in grades 7 to 9 to 20% of lesson hours within a week and in grades 10 to 12 only to lessons of minority languages and ethno-cultural subjects are of particular concern (..) Issues for immediate action: (..) ensure the continued availability of teaching and learning in languages of national minorities throughout the country with a view to meeting existing demand”

Besides, three UN Special Rapporteurs – on minority issues, on freedom of expression and on the right to education – have expressed concern by the amendments.[14] This was also done by the OSCE High Commissioner on National Minorities[15] and the European Parliament Committee on Culture and Education.[16]

In which countries of Europe are there statutory limits on the use of minority language in public schools?

In which countries of Europe are there statutory limits on the use of minority language in private schools?

In which countries of Europe legislators or court claim the existence of minority-language schools to constitute segregation?

In which countries of Europe the regulation on language use in school depends on whether the language is an official language of the EU?

The Minority Monitor Team will raise these questions in its network, follow them up, and endeavour to gather opinions and replies. We will keep you informed.

[1] English version of the pre-2018 Education Law. See Section 9 and Paragraph 9 of the Transitional provisions:

Comply-with-the-second-sentence-of-article-91-and-article-114-of-the-satversme/  Full judgment is only available in Latvian: