11.06.2019  |  Germany  |  Submitted by: Minority Council of the four autochthonous national minorities of Germany

The national minorities and ethnic communities in Germany have repeatedly approached the Federal Government with the request of setting up guiding motorway signs (blue signs) in their settlement areas in German and in the respective minority language. While bilingual place-name signs, information signs and other signs exist and are being erected in the respective settlement areas of the national minorities, this has not yet happened on German motorways.
The directive "Richtlinie für die wegweisende Beschilderung auf Bundesautobahnen 2000" (RWBA) (Directive for Guiding Signage on Federal Motorways) provide for the possibility of multilingual signage on federal motorways only in exceptional cases. At the level of the federal states, however, there are regulations under state law which deviate from the guidelines and provide for multilingual signage for certain minorities recognised in Germany. For example, tourist signs (brown signs) in minority settlement areas on motorways are already bilingual.
The national minorities consider the bilingual signs in the settlement area on all roads without exception to be an important signal to be treated visibly and equally in public. This also includes the signposting on motorways. 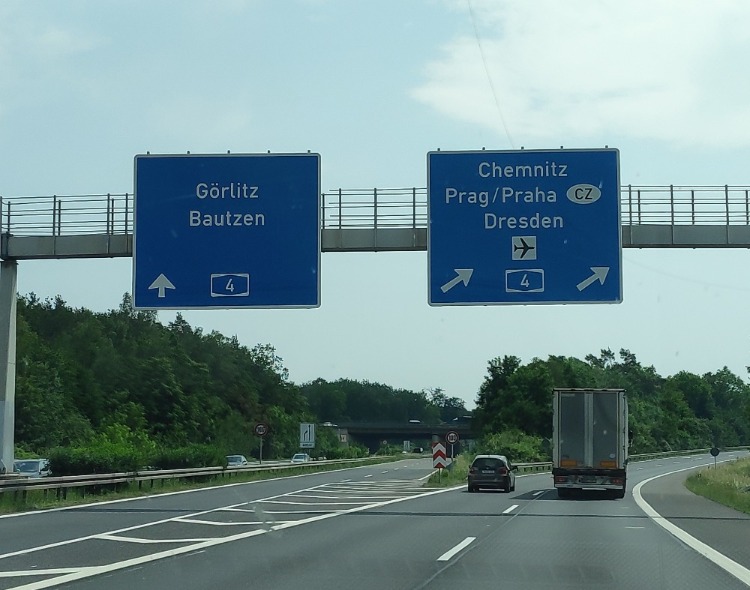 The federal government rejects bilingual signs on motorways beyond the current exceptions. In the view of the Federal Government, any additional information, even in a foreign language, would distract from the traffic situation and thus lead to a reduction in safety and ease. This is the result of the government's reply (Drucksache 19/7094) of 17.01.2019.

According to the RWBA 2000, the official designation is to be used for the spelling of the inner-German targets. "Official traffic signs should be structured in such a way that drivers can pick up the information at a glance and adjust their driving style or decision accordingly," the reply states. In the view of the Federal Government, a bilingual signposting of the destinations on motorways would lead to a doubling of the information already available on the signposts. Drivers can only pick up limited information when driving fast and would be overwhelmed and distracted. This in turn would limit safety.
In contrast, the bilingual signs for long-distance destinations abroad - such as Liège/Liège or Breslau/Wrocław - which can be found in border regions and are practised in the event of strong linguistic discrepancies with destination information, represent a special case, the Federal Government points out. This form of labelling ensures the orientation of foreign-language road users and thus contributes to the safety and smoothness of road traffic.

From the Federal Government's point of view, and particularly for reasons of road safety, there is therefore no need to "provide for bilingual signs in the area of federal motorways beyond these regulations".
The Federal Government cannot explain why the inscription "Bautzen/Budyšin", unlike the existing signs with the inscription "Breslau/Wrocław" or "Prag/Praha", should have a negative impact on road safety. In several European countries (e.g. Finland, Austria, Slovenia) multilingual signposts are permitted on motorways. We are not aware of any evidence that this would have a negative impact on road safety.

Furthermore, with the Framework Convention for the Protection of National Minorities (FCNM) and the European Charter for Regional or Minority Languages (ECRM) of the Council of Europe, Germany has committed itself to making minority languages visible to the public and to promoting their preservation. In Germany, FCNM and ECRM of the Council of Europe are regarded as federal laws.

OPINIONS OF THE RESPECTIVE MONITORING BODIES OF THE COUNSIL OF EUROPE

Resolution CM/ResCMN(2016)4 on the implementation by Germany of the Council of Europe FCNM, adopted by the Committee of Ministers on 3 February 2016 at the 1246th session of the Deputy Ministers, contains further recommendations to support the placement of bilingual place-name signs in minority languages.

The following questions would be of interest to the Minority Council to be examined!

In which regions of Europe are there bilingual signs on highways and motorways? Do these regions have statistics relating to road safety?

Are there any scientific studies in Europe on bilingual signs on motorways dealing with road safety?

The Minority Monitor Team will raise these questions in its network, follow them up, and endeavour to gather opinions and replies. We will keep you informed.

What can we do?

Bilungal Inscriptions in Slovenia -an exemplary model for Europe?

The Slovenian legal system provides for strict bilingualism in the form of topographical inscriptions in the settlement area for the Hungarian and Italian ethnic communities.